So, for a couple of weeks before the trip to France, I was in the process of attempting to improve dust mitigation in / around my studio space.  Everything had been working very well during late summer and early autum, but with the cold weather coming on – David and I discussed making a few tweaks.

Coincidentally, one of my neighbors offer to let me try out a cyclonic dust collector that he had purchased for his home wood shop.  Apparently, it didn’t quit fit his needs.

David had an old 18 inch exhaust fan sitting around – you guessed it gathering dust – so, we went to the job of building a box around that.  David suggested that open up one of the windows behind my work area and we would put the boxed in fan there.  We built it so that I can alternate between a filter and a piece of foam insulation.  They both are the same size and we added channels so that they slide in / out easily.

The Oneida dust collector came with a HEPA filter and needs to be emptied about once a week.  It works well as a roll around unit that I can put in front of the grinder stream coming off of one of my dry diamond blades.  David already has a much larger collector for the whole building and I am using that as well – with a few modifications.  I added another drop collector with a hood and 4 inch hose on the down pipe with my vacuum hose.

Here are a couple of before & after shots… 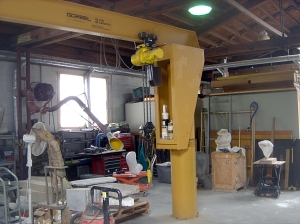 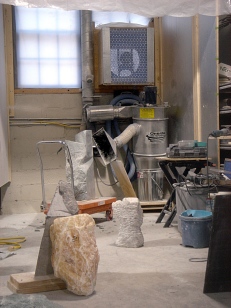 I can still use the existing articulated arm and it seems like I have more useable work space now that the shelves and tool boxes have been moved.

It was also David’s suggestion to use simple foam insulation panels to boarder my work area to deflect dust into the collector and fan as well as just act as a backstop.  These were reinforced using strips of wood that were attached with construction adhesive and then hinged together.

14 Dec This entry was published on December 14, 2008 at 12:39 am. It’s filed under blog and tagged dust collection exhaust fan, hepa filter. Bookmark the permalink. Follow any comments here with the RSS feed for this post.

Older: Of course.. I would love to meet you in Paris
Newer: Time?
%d bloggers like this: