When I was putting together tools to bring to Italy with me – and trying to stay under the weight limit for British Airlines – I was just guessing about what to bring.

I knew that I wanted to concentrate on carving with and air hammer, but I wasn’t sure which one.  So, I brought a few that I’d been using.  Interestingly, I left my Cuturi behind.  This was my first pneumatic machine, but I recently decided that I liked the Trow & Holden hammer I had inherited better (smoother?).  Anyway, I brought that along with two different German pistol grips.  I’m glad that I did because I’ve gotten a chance to really work with them all.

One place I could have saved some weight however was with all of the connections (a.k.a. whips).  The shop I’m in doesn’t used quick connectors.  So, all you really need is a universal thread on the end of any air tool.  I ended up taking all of my whips, valves and nipples off  (they already have an inline valve) and just screwing their air hose onto the end.  This took some getting used to, but it is much simpler.  I just put a few drops of oil into my tools before I screw them onto the end of the line and go.

One of the SEM artigiani loaned me a Cuturi as well, so I got a chance to really compare everything.  I’m using the Trow & Holden almost exclusively now and a couple of the artigiani have tried it out and at least grunted in the affirmative and/or said that ‘it’s a good machine’.  Leo thought that it might even out last a similar sized Cuturi over time based on its heft – apparently, Cuturi has discovered designed obsolescence in recent years.

One thing that is handy to have though is a universal adapter.  Just in case you can’t get the whip off something or you don’t want to take the time.  I just screwed this onto the end of the line and then used my quick connect to do a quick switch. 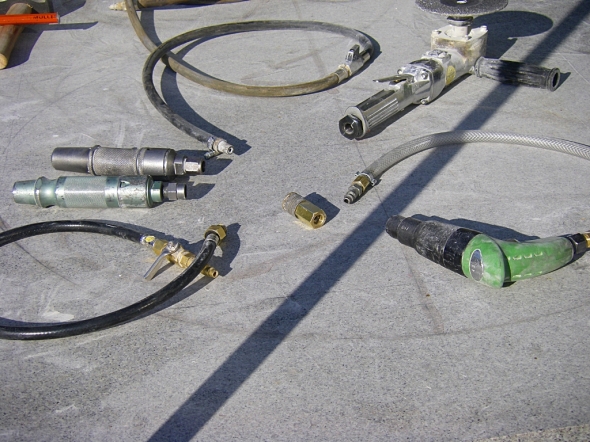 One other thing that I found I liked – once I learned to use it properly – is hand pointing chisel (La Subbia) that they use at studio SEM.  It is made by Muller and is superior to anything I have used in the past.  You do need a decent hammer – 10 Euro. 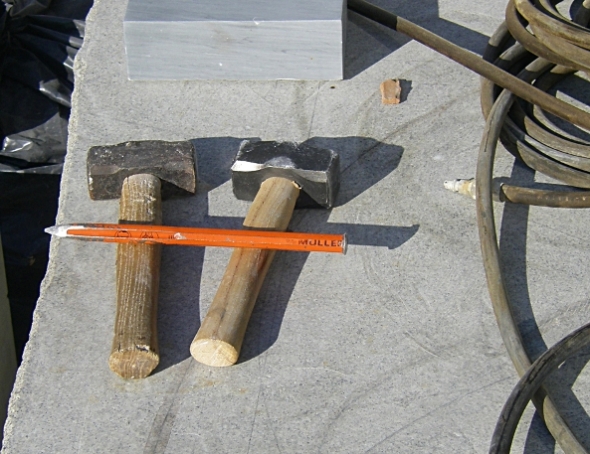 23 May This entry was published on May 23, 2011 at 8:14 pm. It’s filed under blog and tagged air hammer, chisel, cuturi, italy, marble, pietrasanta, pneumatic, sculpture, studio, trow & holden. Bookmark the permalink. Follow any comments here with the RSS feed for this post.