It has been quite a while since I have posted anything related to actually working on sculpture.  That is partly due to being busy getting into shows and a new gallery, but I’ve also been busy working.  I was able to finish three new pieces right after returning from Loveland, CO.

I have a couple of new ones in the works, but the one that I’m concentrating on now is a large piece of Silverdale Limestone.

I haven’t quite decided on a name yet.  It is one of my most abstract forms to date –  references to nature and perhaps the human form.  I have really had a great deal of fun working this material.  So far, I haven’t used a blade on it at all (sort of backwards for me).

I started with just a hammer followed by a large point and pitching chisel that I found at a local stone yard named Precourt down in Sudbury, MA.  They’re stamped with the Precourt name, but made by Trowe & Holden.  I picked up a set of feathers & wedges at the same time – since I’ve never had a set of my own.

Originally, I had a completely different idea for this block of stone that I brought with me during my move to the northeast.  Closer inspection brought to light that the bedding plane wasn’t situated for what I had in mind.

So, I just drew some lines to start with.  Drilled holes with my hammer drill and split off a couple of large chunks that I set aside for smaller works.  I removed quite a bit of material using the point and was amazed at how quickly those primitive tools were creating form based on my initial lines.  Then I ran out of time.

And that’s about where everything sat for about 4-5 months.  I had to load up my tools and finished works to attend first the Marble/marble symposium and then Sculpture in the Park back in Colorado.  After I got back to New England it seemed like there was something going on most of the time.

I worked on drawings and models when I could until I came up with one in particular that I really liked.  I envisioned this model to be fairly large.  Eventually it occurred to me that the partially finished block of limestone that I was stumbling over might just be about the right dimensions… 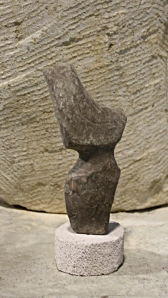 I had sort of already committed to not break out the body grinder and a sintered 9″ blade.  So to speed things up, I broke a one of my German pistol grip air hammers and the pneumatic point chisel that bought to try out last summer.  This combined with the second pistol grip hammer that accepts regular sized shanks turned out to be an excellent combo.

What really got me over the hump was the two Rondel chisels.  One is twice the width of the other and the smaller one also has an extra long shaft.  The smaller one was just what I needed to scoop out material around the ‘waist’ of the piece, but was also very useful for quickly blocking out the overall form.

It seems like I’ve heard this tool referred to as, the American point chisel.  Not sure about that, but I much prefer a Rondel over a Point.

Lately, I have been alternating between my Rondels and a flat five tooth chisel that I picked up a while back down in NYC.  This chisel works like a flat chisel and seems to afford much more control than a regular tooth chisel.  I like the lines that it leaves behind and since I won’t be polishing the surface of the Limestone I plan to leave them for texture (along with the Rondel marks on the interior spaces).   I’ve also been jamming with 3/4″ T&H air hammer that I inherited recently.  Still trying to decide whether I like it better than my original Italian hammer, but one thing for certain – I’m really having a lot of fun!

07 Jan This entry was published on January 7, 2011 at 3:19 am and is filed under blog. Bookmark the permalink. Follow any comments here with the RSS feed for this post.