I have been working in my new studio – off and on – for the past couple of months.  I have been pretty busy with various aspects of my personal life.  Namely, getting a couple of my daughters off to college, attending a couple of weddings and even displaying some of my work.  It was been a busy summer, but hopefully things are going to calm down a bit in the next few weeks.

The time that I have been able to work in David Phillips’ Hillside studio has been increasingly enjoyable.  I was somewhat concerned and had more than a little bit of hesitation to start using some of my more aggressive tools.  I was concerned about creating a big dust problem.  However, one of my new shop mates (Zachary Gabbard – the bronze sculptor, not the bassist) convinced me to just give it a shot and find out.  Happily, the shop is set up to handle just about anything I can throw at it.  David has done an awesome job building and equipping it for working with just about any type of medium one could imagine.

I have also had a chance to get to know Charles Jones the only other artist working in the studio.  Charles is a great guy and well versed in many areas including, stone, resins, bronze and wood.  He told me that he worked as a micro welder for many years initially.  He and David have partnered on several projects – currently a bench project for the Wells Fargo bank in downtown Boston.

David has been exploring a new art form that involves metal, magnets and poly coating – but, doesn’t involve stone.  Which is the reason that he offered me the rental of his stone carving area.  He has had a couple of shows since I moved to the area.  He had an opening last night in Charlestown at the, Vitale Caturano Art Gallery – and is showing by appointment only. 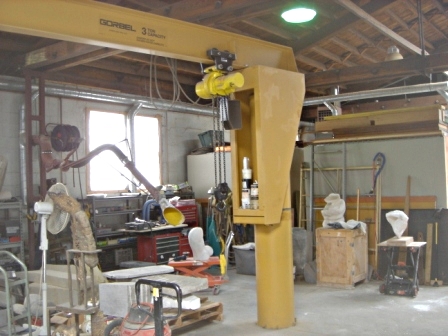 This is what my new work area looks like.  Note the 3 ton crane – it pivots 360 degrees and has an electric gantry.  Anyway, a fantastic shop and great people – I can’t believe my good fortune stumbling into this place…

05 Sep This entry was published on September 5, 2008 at 2:37 am. It’s filed under blog and tagged David, Hillside, medford, Phillips, sculpture, studio. Bookmark the permalink. Follow any comments here with the RSS feed for this post.